inspired.
So from time to time, I whip up a pair of pants for The Incredible Growing Boy, using an old pair of his as a template. Well. The other night, after discovering he had grown out of three pairs of pants (including, but not limited to, his Christmas overalls) and putting him into a pair of 2T pjs that fit just fine, thankyouverymuch, I decided we were at a point where I could use the pattern over at MADE to sew him some new pants.

I repurposed an old pair of curtains to make these: 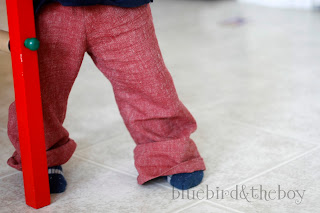 You can quickly tell that, even after some hemming, they are still a bit long. That's okay. We just roll them. The cool thing about using these curtains was that the bottom was already hemmed to begin with. After I turned them up to hem them originally, the hem was on the inside, at the top. (Follow me? No? That's okay. Just skim then.) So then when I rolled the pants up for current wearing purposes, the curtain hem is now again at the bottom, SO it looks like I cuffed them with a hem! (When they stay rolled up, that is.)


So, to recap: Boy growing, new pants made, 2T pattern long, but serviceable with room to grow, pants adorable. And the boy? 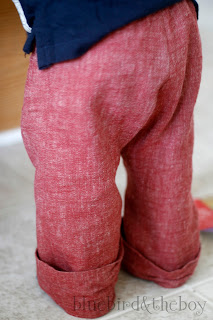