"All this has happened before, and it will all happen again. But this time it happened in London. It happened on a quiet street in Bloomsbury. That corner house over there is the home of the Darling family. And Peter Pan chose this particular house because there were people here who believed in him."
create.
The years in which I get full say as to my children's attire are quickly drawing to a close. In my daughter's case, they've long since been at a close, but she is willing to be talked into a certain look here or there.

So, I worked with my daughter to squeeze out at least one more year of coordinating costumes between for her and her brother. (Last year she was Bo Peep, he was the sheep.)

We narrowed it down to Peter Pan and Tink...but a four year old is a four year old, and she changed her mind at the very last minute when she was reminded of Wendy Darling's looooong nightgown. She loves a good, long dancing dress, this girl!

So the fabric was purchased, further mind changes were nixed, and the sewing began. 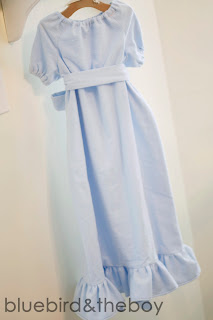 A nightgown. Nice and simple! I researched Wendy's different nightie looks, and settled on a simple peasant style gown. I used this tutorial, lengthening it considerably. My daughter tried it on, and informed me that it still wasn't quite long enough. So I added the ruffle at the bottom, which not only made it longer, but a bit softer, little girl-ish, too. 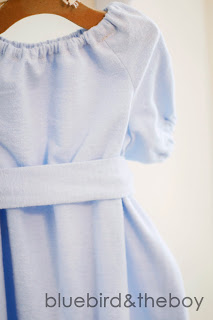 A few notes: The sash is not sewn onto the gown. I wanted her to be able to use it as a nightgown after Halloween, and I figured that a sash would not be conducive to sleeping. Or safety. So I will tack it on for costume use, tuck it away once it's for nighttime use. In this same vein of thinking, I used a soft flannel material, knowing she would be warm and comfortable sleeping in that. Because it's fairly light, it still drapes nicely when on her.


I still have some details to add...I will be making Wendy's hair bow out of the flannel, and I am debating putting a small button on the front of the gown, although my daughter insists that Wendy does not have a button. At all. Thankyouverymuch. I'll keep you posted as to how that one plays out.


Peter Pan
I think I'm a little bit like Sandra Lee (of Semi-Homemade) when it comes to costumes. I want to make the kids' costumes, but I also want it to be as simple as it can be! For my son's Peter costume, I looked up a few existing tutorials online, then combined all my favorite things about them to get his tunic. 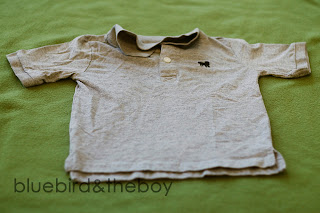 I used fleece, simply because it required a lot less hemming from me. (as in, none!!) To begin, I laid out a shirt that was a bit baggier on him to use as a cutting guide. When I cut around the side, I added an extra inch or so for seam allowance, and at least three inches on the bottom for cutting the triangle pattern. (I know, these measurements are far from precise...but I really think eyeballing it according to your child will work better than exact measurements.) 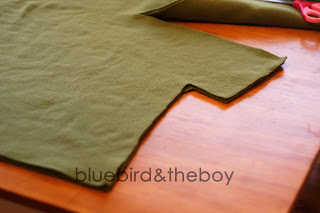 Okay. Have you noticed that I keep mentioning words in this post like "easy" and "simple"? To that end, I cut half of my tunic, and to make it match up, I folded the fabric to use as a guide on the second side. (Picture below) 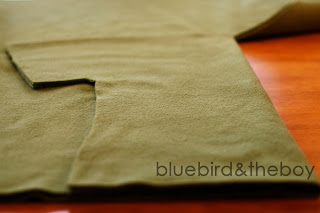 Lazy? Yes. Easy? YES. So, once my tunic was cut out, I cut a small vee in the front, and a small collar in the back. (Again, using existing shirt as a guide). Then you pin the sides together... 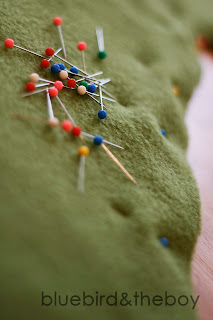 ...and begin to sew! I didn't take any shots of this, because...well, because I was sewing and entertaining the kids. I forgot. I'm sorry. But you've seen beautiful pictures on other blogs of seams much lovelier than what I come up with...so imagine one of those here.


And once your sides are sewn, it's onto the fun part! I cut small triangles out of the arms and bottom (start small, you can always increase the size if you need to!) Hello, Peter! 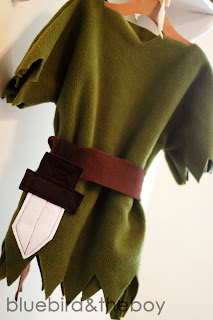 A few notes: The belt is made using one sheet of felt, which I pieced together, and tied on in the back. However, I may have found a more toddler  friendly belt idea...we'll see.


Peter's sword was made using this wonderful tutorial. 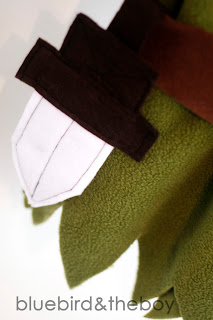 I am planning on using her hat tutorial as a guide for mine, too.


So, there you have it. While accessories are still in the works, the majority is finished, which is a great feeling! And timely, as we're beginning our Halloween festivities this weekend! 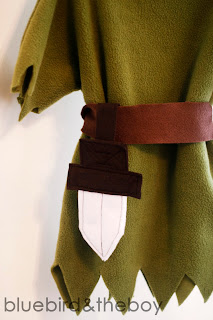